Flannel Friday: Who's Jumping Over the Moon?

This month for our storytimes we going on a few adventures based on the Sesame Street song and book,

Ernie sings about wanting to have fun adventures. He would like to visit the moon, the ocean, the jungle, and dinosaur times. So each week we will visit a new place with Ernie but, just like Ernie, we will always come home ~ because, while it is fun to visit these places, it is always best to be home with the people we love.

During our first adventure, we explored space and learned about the moon and stars through books, songs, fingerplays, and a Star Hopping game.

My favorite rhyme about the moon is Hey Diddle Diddle so it was a must-do for this storytime! 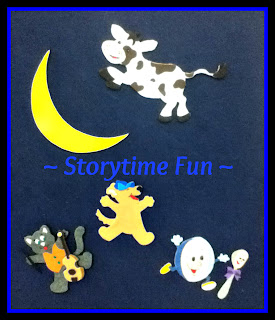 I decided to flannelize this popular Nursery Rhyme so that we could add the pieces to the flannel board as we learned the words to a song that includes movements for each character in the rhyme. We also included the ASL sign for each character. (I don't have the information for the CD available right now but I will add it as soon as I can. It is a very good song version of Hey Diddle Diddle that incorporates following directions as well as encouraging the memorization of this rhyme.)


﻿﻿
To add a little age-appropriate science to our storytime, I included a song about the different phases of the moon. It is called "Moon Play".﻿ During the song, the children are instructed on how to make 4 phases of the moon with their hands. To help the children visualize each phase, I made moons out of fun foam and added a magnetic strip to the back so that they could be displayed on the magnetic board during the song. After the song, the children were asked to say the name of the phase as I removed it from the board. I was very impressed with how man children were able to say the names of each moon phase! Can you name them? (No peeking at the bottom picture!) 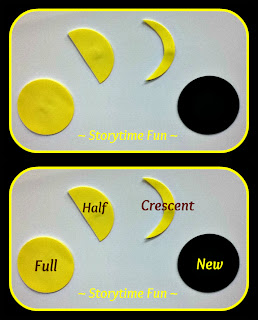 We also did some﻿ star counting to get us ready for our Star Hopping game. (Instructions coming soon!) Again I made my stars from fun foam and added magnets. 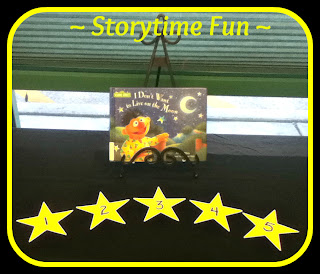 Five sparkly stars shining outside my door,
One shot off
And then there were four.

Four sparkly stars winking right at me,
One shot off
And then there were three.

Three sparkly stars with nothing much to do,
One shot off
And then there were two.

Two sparkly stars searching for the sun,
One shot off
And then there was one.

One sparkly star hoping for some fun,
It shot off.
And then there was none.


This week's Flannel Friday Round-Up is being hosted by Liz on her blog, ReadMrsD. 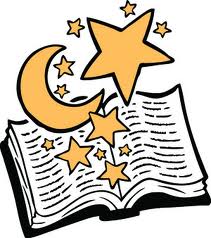 Posted by Storytime Fun at 8:52 PM 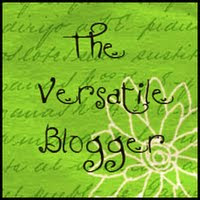